I Know Where I'm Going

Whose Orient is it anyway?

These paintings were executed by two non-French artists, who both studied in Paris, under the French painter Jean-Léon Gérôme, known for his history paintings and frequently Orientalist subject matter. Would it be possible to distinguish between them, based on the information that one of these painters was in fact Ottoman? 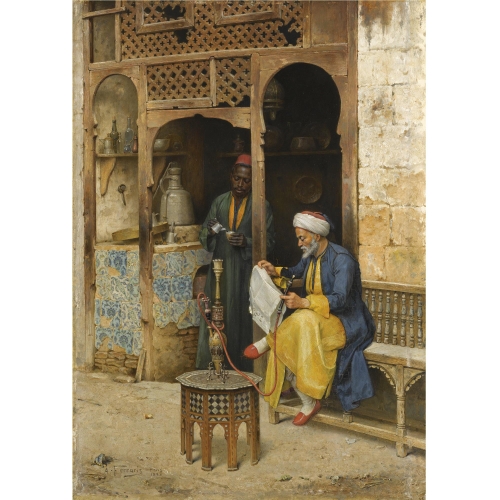 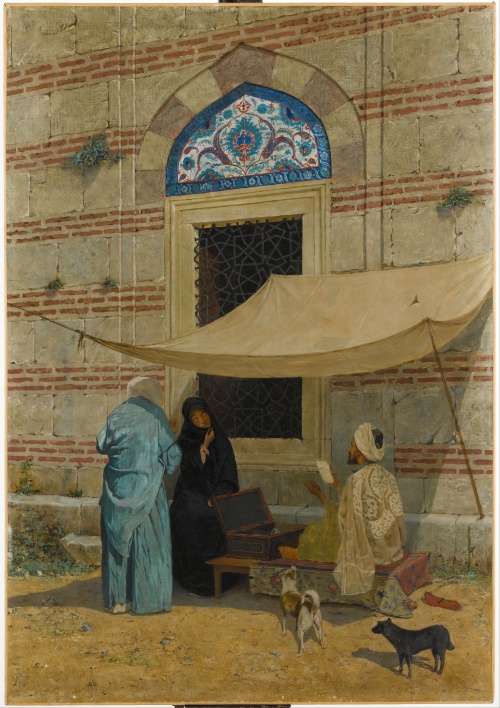 Osman Hamdi Bey’s works (first and third painting) seem to avoid, to a certain degree, the excessive attention to surface detail and the preciosity characteristic of much Orientalist painting. While this could be an opinion unfairly based on a limited amount of works, there is another, perhaps more significant difference. Hamdi Bey painted a number of works representing people engaged in the acts of writing, reading or studying. Apart from the scribe and Quran scholar depicted above, one can cite such paintings as the splendid 1878 Scholar (Sotheby’s sale, 2012) or the 1905 Young Emir Studying from the Walker Art Gallery. Even in Ferraris’s painting, which includes a man engaged in the reading of what seems like a single-sheet newspaper, the action is taking place in a setting associated primarily with leisure, and the viewer’s attention is drawn to the pouring of the coffee and the prominently featured hookah (narghile).

Even when Orientalist painters have avoided the more blatantly Orientalist subject matter (such as harems, elaborately dressed warriors, people simply posing or standing, or similar lack of activity that confirms the myth of the lazy Oriental), having instead opted for more positive representations, many seem to have focused on manual aspects of labor, or the splendid material culture of the Islamic world (such as the examples by Deutsch and Discart below). The implication is that the achievements of Islamic culture were more or less unrelated to intellectual pursuits. On the contrary, Osman Hamdi Bey’s work, although far from unambiguous, offers a fascinating glimpse into the complexities of choosing to look at one’s own world through the lens of a different culture. 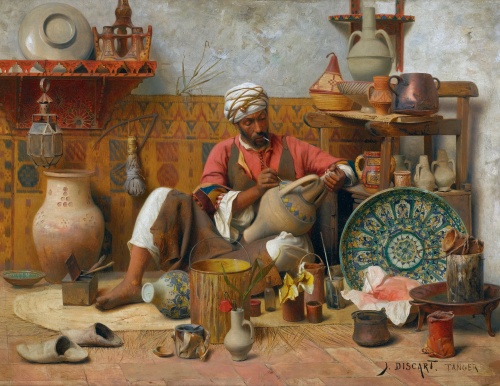 * On Osman Hamdi Bey, one can further listen to the Ottoman History Podcast by Emily Neumeier “Lost and Found: Art, Diplomacy, and the Journey of a Nineteenth-Century Ottoman Painting“. Images accompanying the podcast can be found here.